This is the LARGER piece of MATZAH that is obtained after breaking the middle MATZAH into two pieces at the Passover Seder.

The middle MATZAH represents GOD THE SON (a.k.a YAHUSHUA HA MASHIACH)’S Body which was broken for us!

23 For I received from the Lord what I also passed on to you—that the Lord Yeshua, on the night He was betrayed, took matzah; [a] 24 and when He had given thanks, He broke it and said,[b] “This is My body, which is for you. Do this in memory of Me.” 25 In the same way, He also took the cup, after supper, saying, “This cup is the new covenant[c] in My blood. Do this, as often as you drink it, in memory of Me.”

Through eating the AFIKOMEN (sometime spelt as AFIKOMAN), we get to have a piece of YAHUSHUA HA MASHIACH’S body which HE laid down that we, HIS beloved mankind may be redeemed from the power of sin and Satan. Through eating a piece of YAHUSHUA’S body physically and spiritually, we become more empowered in YAHUSHUA HA MASHIACH! This is explained in our “Holy Communion” Teaching. It is therefore important to have daily Holy Communion as revealed through YAH’S Amightywind Ministry (Prophet Elisheva Eliyahu).

In modern Jewish tradition, the middle MATZAH is usually broken into two pieces and the larger piece is hidden away by the father for the children in the house to find later on after the seder meal. at the beginning of the Seder after which the larger piece

Remember that YAHUSHUA HA MASHIACH was buried away for 3 days in a white linen clothes inside a tomb which had never been used by anybody. This is the concept behind it. However, the Orthodox Jews do following the tradition without believing in this due to the fact that they do not accept YAHUSHUA as their MASHIACH/MESSIAH!

The “AFIKOMEN” is the very last part of the PASSOVER Seder meal. It is considered to be Dessert! Once we share the “AFIKOMEN” amongst ourselves and eat it, we are not allowed to eat anything else after that for the rest of the night!!!

AFIKOMEN has two implications which are as follows:

30 After Yeshua had taken the vinegar, he said, “It is finished!”

Then he bowed his head and died.

Interestingly, YAHUSHUA HA MASHIACH repeats this words in the future sometime after the Great Tribulation as follows:

6 And he also said, “It is finished! I am the Alpha and the Omega—the Beginning and the End. To all who are thirsty I will give freely from the springs of the water of life. 7 All who are victorious will inherit all these blessings, and I will be their God, and they will be my children.

8 “But cowards, unbelievers, the corrupt, murderers, the immoral, those who practice witchcraft, idol worshipers, and all liars—their fate is in the fiery lake of burning sulfur. This is the second death.”

The also ties with the implication of the Hebrew letter “Tav” which has various significance. Click here for more information on this!

7 And the napkin, that was about his head, not lying with the linen clothes, but wrapped together in a place by itself.

Then Simon Peter arrived and went inside. He also noticed the linen wrappings lying there, while the cloth that had covered YAHUSHUA’S head was folded up and lying to the side.

Was that important? Absolutely!

Is it really significant? Yes!

In order to understand the significance of the folded napkin, you have to understand a little bit about Hebrew tradition of that day.

The folded napkin had to do with the Master and Servant, and every Jewish boy knew this tradition.

When the servant set the dinner table for the master, he made sure that it was exactly the way the master wanted it..

The servant would then know to clear the table. For in those days, the wadded napkin meant, ‘I’m done’.

But if the master got up from the table, and folded his napkin, and laid it beside his plate, the servant would not dare touch the table,

because……….. The folded napkin meant,

YAHUSHUA HA MASHIACH is coming back to complete that which HE started!

We are earnestly awaiting HIS Second Coming!

(Source of the napkin teaching: https://themessagehub.wordpress.com/2015/12/29/the-mystery-of-the-folded-napkin-in-jesus-tomb/) 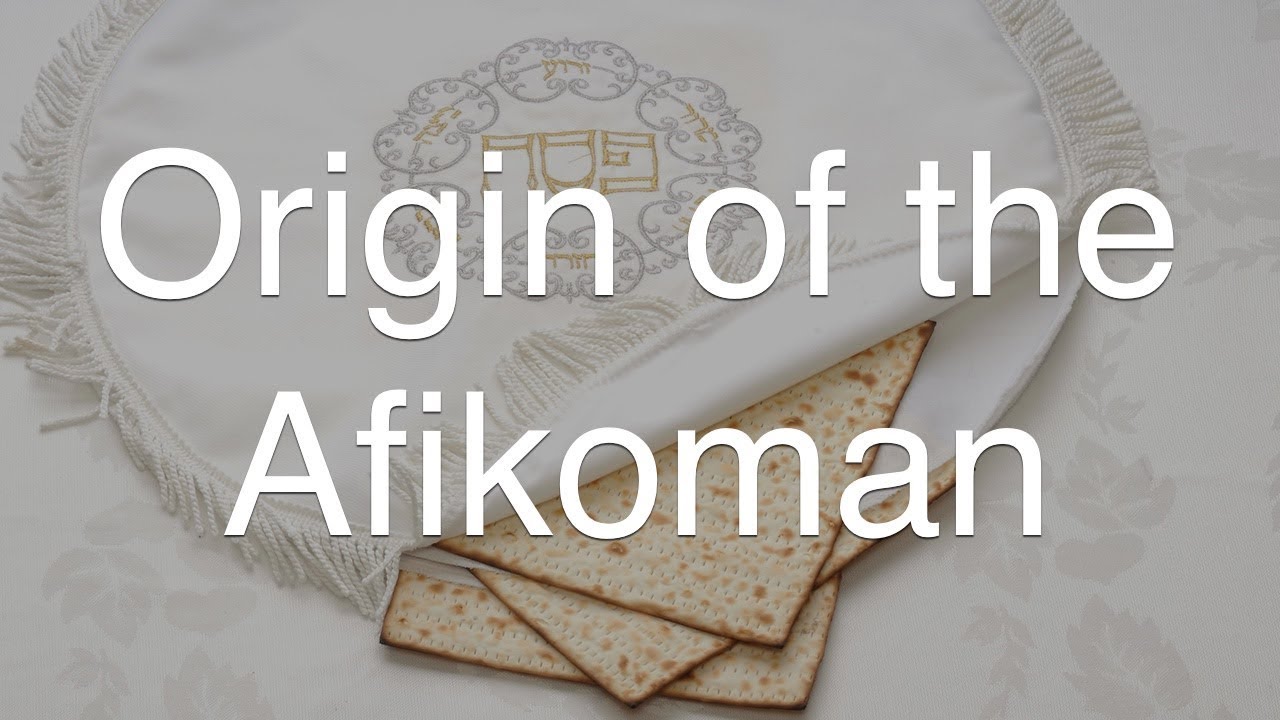 According to Wikipedia, Afikoman. Afikoman (Hebrew: אֲפִיקוֹמָן‬, based on Greek epikomon [ἐπὶ κῶμον] or epikomion [ἐπικώμιον], meaning “that which comes after” or “dessert”) is a half-piece of matzo which is broken in two during the early stages of the Passover Seder and set aside to be eaten as a dessert after the meal.

The matzah that is set aside is called the afikoman, and it is eaten for “dessert” after the Seder meal in commemoration of the paschal sacrifice.(The word afikoman is from the Greek epikomen or epikomion, meaning “that which comes after.” Others say that it comes from the Aramaic afiku min, which means “bring out various delicacies with which to end the meal.”).

The simple reason that we put the afikoman aside or hide it, is because we will eat this matzah only near the very end of the Seder, and we don’t want it to get mixed up with the other matzahs at the table.

In addition, when putting aside the afikoman matzah, the custom is to wrap it in some sort of cloth or napkin as a remembrance of the way the Jews left Egypt with their soon-to-be matzahs as described in the Torah:

The people picked up their dough when it was not yet leavened, their leftovers bound in their garments on their shoulders.

Some have the custom to hide the piece of matzah that was set aside for the afikoman, and have the children find it and then return it only in lieu of a promised gift. This custom is based on a statement in Jewish literature: “We snatch matzahs on the night of Passover in order that the children should not fall asleep.” In other words, the game of hiding the afikoman and the accompanying bargaining for a gift is an activity to engage the kids and make sure that they don’t fall asleep during what is invariably a long evening.

Others do not have the custom for the children to take or “steal” the afikoman, for fear that the activity would give them a taste of stealing.

On a deeper level:

The afikoman represents our liberation from Egyptian exile.

That redemption, however, was not a complete one, as we are still awaiting the final redemption with the coming of MASHIACH.

Setting aside or hiding the larger half of the matzah reminds us that the best, the real redemption, is yet to come, still hidden in the future.