THE BOOK OF TOBIT

This book tells the story of Tobit, a righteous Israelite of the tribe of Naphtali, living in Nineveh after Sargon II had deported the northern tribes of Israel to Assyria in 721 BC. The first two and a half chapters are written in the first person.

Tobit, raised by his paternal grandmother, Deborah, remains loyal to the worship of God at the temple in Jerusalem, refusing the cult of the golden calves that Jeroboam, king of Northern Israel, set up at Dan. He is particularly noted for his diligence in attempting to provide proper burials for fallen Israelites whom Sargon’s successor, Sennacherib, has slain. For this behavior the king seizes his property and exiles him. After Sennacherib’s death, Tobit is allowed to return to Nineveh, where he buries a man who has been murdered on the street. That night, he sleeps in the open and is blinded by bird droppings which fall into his eyes. The blindness caused by this injury strains his marriage and, ultimately, he prays for death. 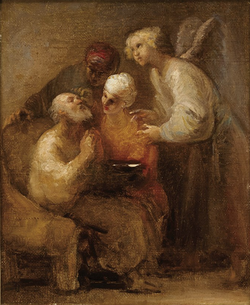 Tobias heals the blindness of his father Tobit, by Domingos Sequeira

Meanwhile, in faraway Media, a young woman named Sarah has prayed for death in despair. The demon of lust, Asmodeus (“the worst of demons”), abducts and kills every man Sarah marries on their wedding night before the marriage can be consummated. God sends the angel Raphael, disguised as a human, to heal Tobit and free Sarah from the demon.[17]

The main narrative is dedicated to Tobit’s son, Tobiah or Tobiyah (Greek: Τωβίας Tobias), who is sent by his father to collect money that the elder has deposited in distant Media. Raphael presents himself as Tobit’s kinsman, Azariah, and offers to aid and protect Tobias. Under Raphael’s guidance, Tobias journeys to Media with his dog.

Along the way, while washing his feet in the river Tigris, a fish tries to swallow his foot. By the angel’s order, he captures it and removes its heart, liver and gall bladder.

Upon arriving in Media, Raphael tells Tobias of the beautiful Sarah, whom Tobias has the right to marry because he is her cousin and closest relative. The angel instructs the young man to burn the fish’s liver and heart to drive away the demon when he attacks on the wedding night.

The two marry, and the fumes of the burning organs drive the demon to Upper Egypt, where Raphael follows and binds him. Sarah’s father had been digging a grave to secretly bury Tobias under the assumption that he would be killed. Surprised to find his son-in-law alive and well, he orders a double-length wedding feast and has the grave secretly filled. Since the feast prevents him from leaving, Tobias sends Raphael to recover his father’s money.

After the feast, Tobias and Sarah return to Nineveh. There, Raphael tells the youth to use the fish’s gall to cure his father’s blindness. Raphael then reveals his identity and returns to heaven, and Tobit sings a hymn of praise.

Tobit tells his son to leave Nineveh before God destroys it according to prophecy (compare the Book of Nahum). After the prayer, Tobit dies at an advanced age. After burying his father and mother, Tobias returns to Media with his family.

The Book of Tobit
Chapter 1
1. Tobias of the tribe and city of Nephtali, (which is in
the upper parts of Galilee above Naasson, beyond the
way that leadeth to the west, having on the right hand
the city of Sephet,)
2. When he was made captive in the days of Salmanasar
king of the Assyrians, even in his captivity, forsook
not the way of truth,
3. But every day gave all he could get to his brethren his
fellow captives, that were of his kindred.
4. And when he was younger than any of the tribe of
Nephtali, yet did he no childish thing in his work.
5. Moreover when all went to the golden calves which
Jeroboam king of Israel had made, he alone fled the
company of all,
6. And went to Jerusalem to the temple of the Lord, and
there adored the Lord God of Israel, offering faithfully
all his firstfruits, and his tithes,
7. So that in the third year he gave all his tithes to the
proselytes, and strangers.
8. These and such like things did he observe when but a
boy according to the law of God.
9. But when he was a man, he took to wife Anna of his
own tribe, and had a son by her, whom he called after
his own name,
10. And from his infancy he taught him to fear God,
and to abstain from all sin.
11. And when by the captivity he with his wife and
his son and all his tribe was come to the city of
Ninive,
12. (When all ate of the meats of the Gentiles) he
kept his soul and never was defiled with their meats.
13. And because he was mindful of the Lord with all
his heart, God gave him favour in the sight of
Salmanasar the king.
14. And he gave him leave to go whithersoever he
would, with liberty to do whatever he had a mind.
15. He therefore went to all that were in captivity,
and gave them wholesome admonitions.
16. And when he was come to Rages a city of the
Medes, and had ten talents of silver of that with which
he had been honoured by the king:
17. And when amongst a great multitude of his
kindred, he saw Gabelus in want, who was one of his
tribe, taking a note of his hand he gave him the
aforesaid sum of money.
18. But after a long time, Salmanasar the king being
dead, when Sennacherib his son, who reigned in his
place, had a hatred for the children of Israel:
19. Tobias daily went among all his kindred, and
comforted them, and distributed to every one as he
was able, out of his goods:
20. He fed the hungry, and gave clothes to the naked,
and was careful to bury the dead, and they that were
slain.
21. And when king Sennacherib was come back,
fleeing from Judea by reason of the slaughter that God
had made about him for his blasphemy, and being
angry slew many of the children of Israel, Tobias
buried their bodies.
22. But when it was told the king, he commanded
him to be slain, and took away all his substance.
23. But Tobias fleeing naked away with his son and
with his wife, lay concealed, for many loved him.
24. But after forty-five days, the king was killed by
his own sons.
25. And Tobias returned to his house, and all his
substance was restored to him.