Both their rods budded in a selection process.

During Aaron’s time, YAHUVEH was trying to prove a point to the Children of Israel, that is that the one whose rod budded was the most prominent of all the men of Israel and particularly within the tribe of Levi. Some of the children of Israel were jealous of Moses and Levi and didn’t appreciate that only they had access to the Presence of YAHUVEH plus offer sacrifices unto YAHUVEH!

YAHUVEH caused the rod to bud also as a testimony against anyone who rebelled against YAHUVEH’S Chosen leader amongst HIS people.

Many years later, when it was was for YAHUVEH to send HIS Only Begotten Son, YAHUSHUA to the earth in physical form to save HIS people, another selection process took place.

YAHUSHUA’S earthly mother was chosen by YAH and sent in a very special way to a couple who had been barren for a so long. Her life was to be consecrated unto YAHUVEH, YAHUSHUA and SHKINYINYAH GLORY/RUACH HA KODESH! There were many things she was to abstain from. Also, she grew up in the Temple from age 3 up until her Bat Mitzvah age (12).

Whenever a person’s life is consecrated like that by being raised by the Priests in the Temple, they were not just released into the world anyhow upon reaching their Bar Mitzvah / Bat Mitzvah age. They were released to carefully selected marital partners.

In Myriam’s case, the Priests had kind of forgotten her then they remember. RUACH HA KODESH was involved in the entire selection process as recorded. RUACH HA KODESH clearly spoke to the High Priest who did follow the instructions accordingly.

Rods of various men in particular priests were placed in the Temple. The result was that Joseph’s budded. Joseph was very reluctant to place his rod as he felt that he was a very old man plus he had already been married before but was widowed. RUACH HA KODESH refused to proceed with the selection process until Joseph appeared and placed his rod down together with the rest. He ended being selected to marry Myriam/Mary. He accepted reluctantly thereby becoming betrothed/engaged to Myriam.

He took Myriam to stay with her parents while he went away to prepare their marital home. It took him some months to do this. While he was away, YAHUVEH sent one of HIS Holy Angels,  Gabri’EL to Myriam to let her know that she was selected to bring MASHIACH into the world in human form. Myriam eventually went away to hide at her cousin, Elizabeth’s house. Remember that Elizabeth was already pregnant by this time with YAHuchanan/John the Baptist/Immerser. Myriam hid there until Joseph returned. When Joseph discovered that his wife-to-be was expecting a child and they hadn’t had any sexual relations, he became disturbed and in fact nearly dumped her.

Joseph went back to the High Priest at the time (Joseph was a Priest who served in the temple with the High Priest). He sought advice. When the High Priest prayed, RUACH HA KODESH/SHKINYINYAH GLORY said it was all YAH’S Will and that Joseph should marry Myriam.

We all know how the rest of the story goes. YAHUVEH’S Holy Angel, Gabri’EL was sent to appear to Joseph in order to encourage him. Joseph still continued to deliberate for sometime.

Joseph eventually surrendered to YAHUVEH by accepting HIS Will. HE took Myriam to wife and supported her throug the pregnancy and delivery and raising of YAHUSHUA HA MASHIACH. Joseph died sometime close to YAHUSHUA’S Ministry. This was all Divinely planned by YAH Almighty so that whenever YAHUSHUA spoke of HIS FATHER, we would understand that HE was referring to ABBA YAHUVEH! 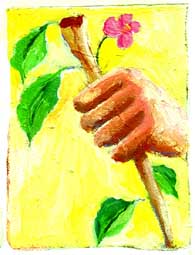 So both Aaron’s and Joseph’s rods ot staffs budded as part of a crucial selection process in the history of mankind.

Aaron was selected as the first ever High Priest of YAH – mediator between YAHUVEH and HIS People, Israel.

Joseph was selected as the earthly father of the most important person ever to walk the earth, that is ABBA YAHUVEH’S Only Begotten Son, The One and Only True Mashiach whose name is YAHUSHUA -YAH’S Salvation!