ARE THEY THE SAME THING? 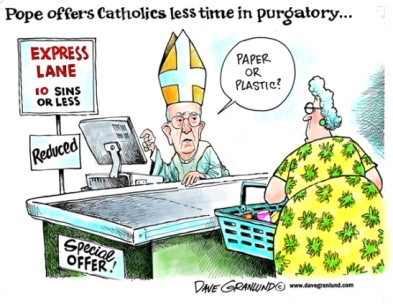 Purgatory is all about selling YAH’S SALVATION for personal gain.

There is no such thing as Purgatory in YAH’S Holy Scriptures!!!

Purgatory is Satan’s Lie from the pits of hell!

It makes man believe that they DO NOT HAVE TO BE HOLY AS YAH IS HOLY since it claims that there is a chance for them to repent after earthly death.

It makes man NOT TO TAKE YAH AND HIS WORD SERIOUSLY!!!

It also makes YAH appear as someone who is ONLY OF LOVE and not wrath or that YAH is against justice for the sin committed by man!

The HOLY SCRIPTURES only talk about TWO PATHS/WAYS TO CHOOSE FROM namely,

13 “Go in through the NARROW GATE; for the gate that leads to destruction is wide and the road broad, and many travel it; 14 but it is a narrow gate and a hard road that leads to life, and only a few find it.

PURGATORY was created by the Roman Catholic Church (System) as Satan’s means to deceive man-kind all the way to hell.

The Roman Catholic Church System used it to gain riches as they were LITERALLY SELLING SALVATION TO MANKIND!