More information to be added…

Objects, actions or creatures that have a deeper significance and are to be understood by those who see them or use them.

YAHUVEH GOD has included so many intricate details in HIS WORD, Why are they there? Do they mean something? If so, what is the meaning?

What is the definition of the word “SYMBOL”?

1.
something used for or regarded as representing something else; a material object representing something, often something immaterial; emblem, token, or sign.
2.
a letter, figure, or other character or mark or a combination of letters or the like used to designate something:
the algebraic symbol x; the chemical symbol Au.
3.
(especially in semiotics) a word, phrase, image, or the like having a complex of associated meanings and perceived as having inherent value separable from that which is symbolized, as being part of that which is symbolized, and as performing its normal function of standing for or representing that which is symbolized: usually conceived as deriving its meaning chiefly from the structure in which it appears, and generally distinguished from a sign.

The Hebrew Alphabet is full of SYMBOLS that have deep meanings as seen in the image below: 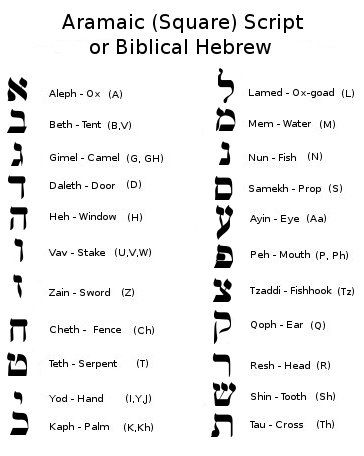 According to Wikipedia, the word SYMBOL in the Hebrew Language is: “CHAI”.

The word is made up of two letters of the Hebrew alphabet – Chet (ח‎) and Yod (י‎), forming the word“chai”, meaning “alive”, or “living”. The most common spelling in Latin script is “Chai”, but the word is occasionally also spelled “Hai”.

There have been various mystical numerological speculations about the fact that, according to the system of gematria, the letters of chai add up to 18 (see “Lamedvavniks” etc.). For this reason, 18 is a spiritual number in Judaism, and many Jews give gifts of money in multiples of 18 as a result.

Jews often give gifts and donations in multiples of 18, which is called “giving chai”. Mailings from Jewish charities usually suggest the amounts to give in multiples of chai (18, 36, 54, dollars, etc.) rather than the usual multiples of 25.

There is BIBLICAL SIGNIFICANCE/IMPLICATIONS of the following..

Please click on the sub-menus under this page tab and you will see the various pages with explanations of the above.