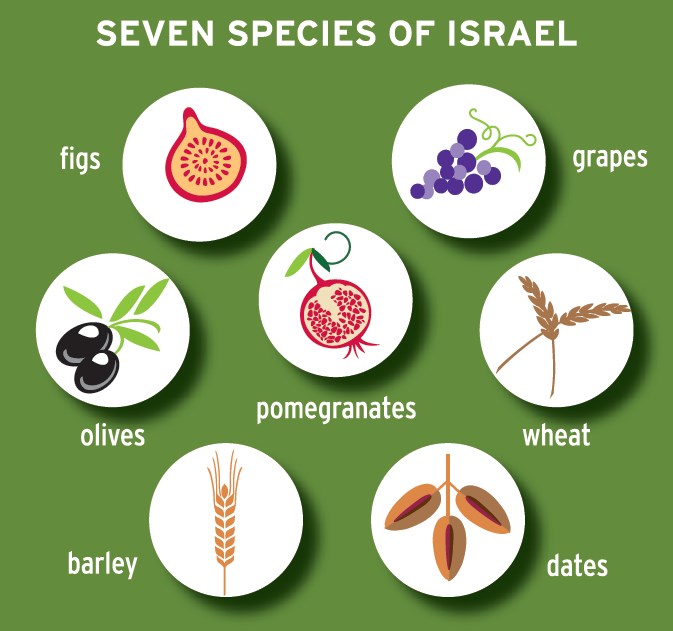 The blessing recited on fruit is:

(Translation:)
Blessed are You, LORD YAHUVEH (a.k.a YAHWEH) our ELOHIM (a.k.a GOD), King of the universe, who creates the fruit of the tree.

• In particular, one should include among the fruits one eats on this day the species of fruit which the land of Israel is praised for: grapes, olives, dates, figs and pomegranates.

If one eats a sufficient amount of fruits of these fruits, one recites the special after blessing Al Ha’aretz ve’al HaPeorot.

The blessing of Shehecheyanu:

Blessed are You, LORD YAHUVEH our ELOHIM (a.k.a GOD), King of the universe, who has granted us life, sustained us, and enabled us to reach this occasion.

• Many also have a custom of eating carob on this day. There is yet another custom which many have and that is to eat the Etrog, either in the form of preserves, sugared slices, etc.

• It was the custom of the famed Rabbi Isaac Luria(“Arizal“) to eat 15 varieties of fruits on the 15th of Shevat.

• On this day Tachnun is omitted from the Shacharit and Mincha (morning and afternoon) prayers as well as from the Mincha prayer on the afternoon beforehand.

Here is a meatless Tu B’Shevat menu that you can enjoy with your family. Bear in mind that the vegetarian aspect of this menu is purely my personal preference. You could certainly serve a meat meal on the holiday, but to keep it kosher don’t mix any of the dairy dishes here with a meat entrée.