The DAUGHTERS OF ZELOPHEHAD of (Hebrew: בְּנוֹת צְלָפְחָד‎‎) were FIVE SISTERS – MAHLAH, NOA, HOGLAH, MILCAH, and TIRZAH – mentioned in the Hebrew Bible, (Numbers 27) who lived at the END of the ISRAELITES’ EXODUS from EGYPT as they prepared to enter the PROMISED LAND and who raised before the ISRAELITE COMMUNITY the case of a WOMAN’S RIGHT and OBLIGATION to inherit PROPERTY in the ABSENCE of a MALE HEIR in the family.

ZELOPHEHAD (meaning “dark shadow”), a man of the TRIBE OF MANASSEH, had five daughters but no sons, and therefore no MALE HEIRS. 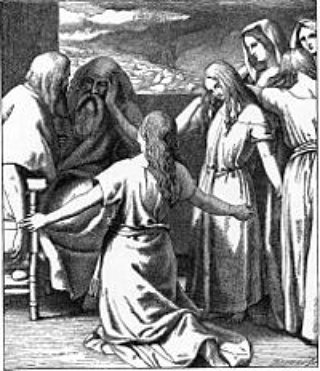 ZELOPHEHAD’S DAUGHTERS did as GOD had commanded in the instructions conveyed to MOSES, and EACH MARRIED a SON of an UNCLE.

When the Israelites entered the land, ZELOPHEHAD’S daughters appeared before ELEAZER the PRIEST, JOSHUA (who by then had assumed leadership from MOSES), and the chieftains, reminding them that GOD had commanded MOSES to grant them a portion among their kinsmen, and ZELOPHEHAD’S DAUGHTERS received a portion in the holdings of MANASSEH, probably on the EAST SIDE of the JORDAN RIVER.

….More information to be added soon…