The GREAT “HALLEL”: TODAH/Thank You PSALMS

It is widely recognized that YAHUSHUA HA MASHIACH’S “Last Supper” with HIS disciples at the time was a “Passover Seder meal” and that the Jewish Passover liturgy included special hymns drawn from the book of Psalms. These hymns were known as the HALLEL PSALMS (meaning “Praise” psalms), and consisted of:

You servants of Yahweh, praise him.
Praise the name of Yahweh.
2 Thank the name of Yahweh now and forever.
3 From where the sun rises to where the sun sets,
the name of Yahweh should be praised.
4 Yahweh is high above all the nations.
His glory is above the heavens.
5 Who is like Yahweh our Elohim?
He is seated on his high throne.
6 He bends down to look at heaven and earth.
7 He lifts the poor from the dust.
He lifts the needy from a garbage heap.
8 He seats them with influential people,
with the influential leaders of his people.
9 He makes a woman who is in a childless home
a joyful mother.

1 When Israel left Egypt,
when Jacob’s family left people who spoke a foreign language,
2 Judah became his holy place and Israel became his kingdom.
3 The Red Sea looked at this and ran away.
The Jordan River turned back.
4 The mountains jumped like rams.
The hills jumped like lambs.
5 Red Sea, why did you run away?
Jordan River, what made you turn back?
6 Mountains, what made you jump like rams?
Hills, what made you jump like lambs?
7 Earth, tremble in the presence of the Lord,
in the presence of the Elohim of Jacob.
8 He turns a rock into a pool filled with water
and turns flint into a spring flowing with water.

1 I love Yahweh because he hears my voice, my pleas for mercy.
2 I will call on him as long as I live
because he turns his ear toward me.
3 The ropes of death became tangled around me.
The horrors of the grave took hold of me.
I experienced pain and agony.
4 But I kept calling on the name of Yahweh:
“Please, Yahweh, rescue me!”

5 Yahweh is merciful and righteous.
Our Elohim is compassionate.
6 Yahweh protects defenseless people.
When I was weak, he saved me.
7 Be at peace again, my soul,
because Yahweh has been good to you.

1 Praise Yahweh, all you nations!
Praise him, all you people of the world!
2 His mercy toward us is powerful.
Yahweh’s faithfulness endures forever.

19 Open the gates of righteousness for me.
I will go through them and give thanks to Yah.
20 This is the gate of Yahweh
through which righteous people will enter.

21 I give thanks to you,
because you have answered me.
You are my savior.
22 The stone that the builders rejected
has become the cornerstone.
23 Yahweh is responsible for this,
and it is amazing for us to see.
24 This is the day Yahweh has made.
Let’s rejoice and be glad today!
25 We beg you, O Yahweh, save us!
We beg you, O Yahweh, give us success!
26 Blessed is the one who comes in the name of Yahweh.
We bless you from Yahweh’s house.
27 Yahweh is El, and he has given us light.
March in a festival procession
with branches to the horns of the altar.
28 You are my El, and I give thanks to you.
My Elohim, I honor you highly.

29 Give thanks to Yahweh because he is good,
because his mercy endures forever.

The Mishnah connects Hallel with two holidays in the Jewish calendar: Pesach and Sukkot. It seems that the primary association is actually with Sukkot, a Temple-based holiday on which the full Hallel is recited every day. In contrast, the complete Hallel is recited only on the first of the seven days of Pesach , in conjunction with the slaughtering and eating of the Passover sacrifice. Nonetheless, the connection between Pesach and Hallel runs deep.

We find a fleeting reference to them in Gospel accounts of the Last Supper. After identifying the bread as HIS “body” and the wine as HIS “blood,” the Gospel reads:

30 After they sang a hymn, they went to the Mount of Olives.

The psalms of ” HALLEL” are closely related to the song that the Israelites sang at the Sea of Reeds, a prayer of thanksgiving that both describes the personal experience of redemption and promotes worship at a central site where the glory and kingship of YAH can be proclaimed in public.

As noted, the Song at the Sea concludes with a reference to the Temple, which can be accessed only by an act of “crossing over” from wasteland to the Promised Land:

…Till Your people crossed over, O LORD, till the people you made Yours crossed over. You’ll bring them, You’ll plant them, on the mount of Your estate, a firm place for Your dwelling You wrought, o LORD, the sanctum, O Sovereign, Your hands firmly founded. The LORD shall be king for all time!
(Exod. 15:16-18)

This is precisely the form of thanksgiving that is expressed in the six psalms that comprise HALLEL, and especially in the last four. The division of the HALLEL at the Seder into:

…………is a division suggested inherently by the text.

Now, this is interesting to highlight, for at least three reasons. 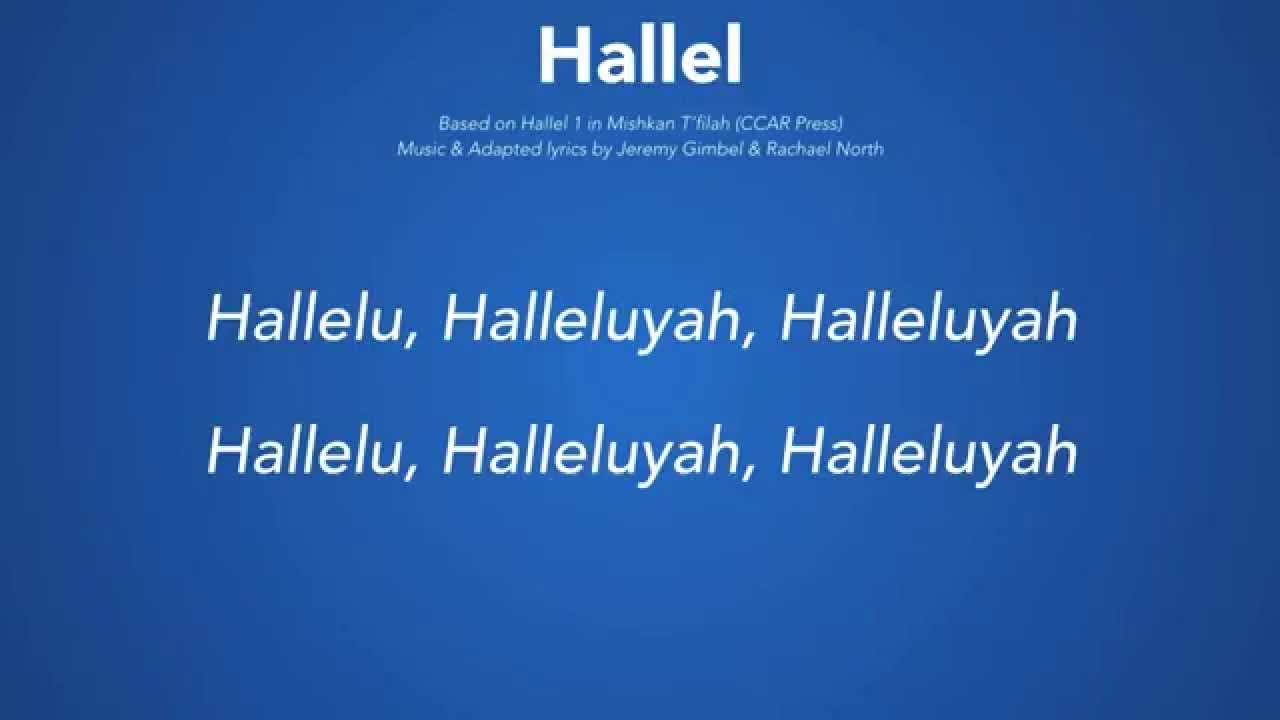 From Egypt to the Temple

It is clear that the recitation of HALLEL is appropriate for Sukkot, which is the quintessential Temple holiday, because the Temple theme is so central to these psalms. However, the precise narrative arc traced in the HALLEL passages is actually more reflective of the Passover experience: HALLEL highlights the movement from Egypt to the Temple, and the movement from human bondage to service of YAH (a.k.a ELOHIM meaning GOD) is what the Passover story is all about. Indeed, in the TORAH, the concept of constructing sacred space marks both the culmination of the Exodus story (in the context of the Song at the Sea) and the conclusion of the book of Exodus as a whole.

But the Rabbis chose to end the Seder with HALLEL for another reason as well. The HALLELwe recite at the Seder and in holiday prayers is called:

……………………………………not only because of the explicit reference to Israel leaving Egypt in Psalm 114, but also because the historical Exodus story and the experience of personal redemption are predominant motifs throughout the passages.

In the biblical text itself, the Israelites do not pray to YAHin response to their suffering at the hands of the Egyptians.

The Israelites “groan” when their labor is intensified and “cry out”

and YAH responds to these cries of pain (2:23-25); but they are not expressions of prayer. Lack of voice and personal agency is a fundamental feature of slavery that precludes prayer. Remarkably, by the end of the story, the People of Israel are able to sing–to tell of their experiences, to express their gratitude, to articulate their hopes–which is the ultimate mark of freedom.

The following videos give an idea of what the HALLEL was like in Ancient Israel:

Video: Teaching – The hymn they sang after the Last Supper…was that the Hallel?