As seen in 1 Corinthians 12 & 14, each one of YAHUSHUA’S BRIDE and GUESTS make up HIS BODY and each have a role to play while on earth during their WALK OF FAITH IN YAHUSHUA HA MASHIACH (JESUS CHRIST / YESHUA)! Their roles are given by RUACH HA KODESH. RUACH HA KODESH anoints (commissions and empowers) us to fulfill YAH’S calling in our lives. YAHUSHUA’S Apostles were ANOINTED BY RUACH HA KODESH to do what they did for YAH’S KINGDOM!

The Hebrew word for the word “ANOINTING” is “MASHACH”. Why Hebrew? Because it is the ORIGINAL LANGUAGE OF THE HOLY SCRIPTURES plus LANGUAGE OF CREATION!

The application of oil was associated with times of rejoicing and celebration. It also possessed a deeper significance, including that of being singled out by God for special favour or responsibilities.

Anointing as a social custom:

A prophet 1Ki 19:15-16 the only reference to the anointing of a prophet

For healing Mk 6:13 It has been suggested that anointing in a healing context may be related to the use of oil for medicinal purposes. See also Jas 5:14

The figurative use of anointing:

ANOINT” means to SET SOMEONE APART, to AUTHORISE and EQUIP him or her for a task of SPIRITUAL IMPORTANCE. 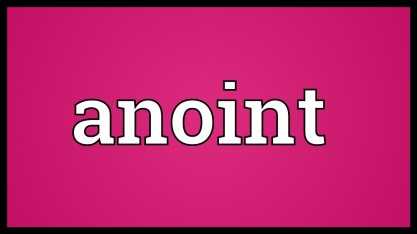 Note that Satan also anoints. Satan always COUNTERFEITS YAH’S CREATION! We need to beware because Satan is in this world to steal, kill and destroy as seen in John 10:10 and 1 Peter 5:7-8. Satan has his evil anointing that he gives to his agents. We therefore need to exercise discernment always!