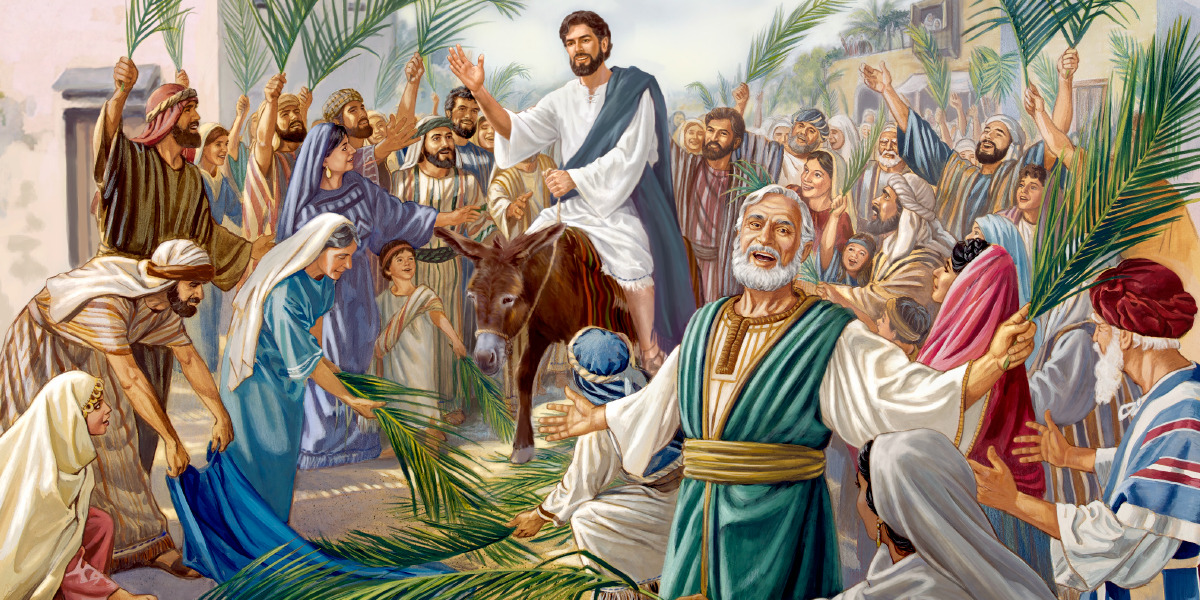 It was a Saturday, YAH’S Sabbath (not Sunday!!!) and it occurred 4 days before YAHUSHUA’S (JESUS’, not Yeshua!!!) arrest, torture, crucifixion and death.

Note that we are in the Hebrew Month (Nisan/Aviv) of the:

This implies many things, the main being that when the LION roars, YAH’S Judgement comes and YAH’S Children get delivered from Satan’s power!

The LORD Sends HIS King

9 Rejoice with all your heart, people of Zion!
Shout in triumph, people of Jerusalem!
Look! Your Melek is coming to you:
He is righteous and victorious.
He is humble and rides on a donkey,
on a colt, a young pack animal.

The King Comes to Jerusalem

28 After YAHUSHUA  had given this illustration, he continued on his way to Jerusalem.

29 When he came near Bethphage and Bethany at the Mount of Olives (as it was called), YAHUSHUA sent two of his disciples ahead of him. 30 He said to them, “Go into the village ahead of you. As you enter, you will find a young donkey tied there. No one has ever sat on it. Untie it, and bring it. 31 If anyone asks you why you are untying it, say that the Lord needs it.”
32 The men YAHUSHUA sent found it as he had told them. 33 While they were untying the young donkey, its owners asked them, “Why are you untying the donkey?”
34 The disciples answered, “The Lord needs it.”
35 They brought the donkey to YAHUSHUA, put their coats on it, and helped YAHUSHUA onto it. 36 As he was riding along, people spread their coats on the road. 37 By this time he was coming near the place where the road went down the Mount of Olives. Then the whole crowd of disciples began to praise YAH (GOD)  for all the miracles they had seen. 38 They shouted joyfully,

“Blessed is the king who comes in the name of the Lord!
Peace in heaven, and glory in the highest heaven.”

39 Some of the Pharisees in the crowd said to YAHUSHUA, “Teacher, tell your disciples to be quiet.”

40 YAHUSHUA replied, “I can guarantee that if they are quiet, the stones will cry out.”

Note that the DONKEY had to be one that nobody had ever ridden before!!!

Why was this the case?

It’s the same day on which The Children of Israel entered The Promised Lamb many years before, HalleluYAH!

This event we see in the picture is referred to as the:

Songs/Hymns, such as the following are sang yearly in commemoration of this event, the main one being:

Video: Ride on, Ride on in Majesty – WITH LYRICS

Another one is as follows:

Video: All Glory Laud and Honor | With Lyrics

Well, this event did not take place on a Sunday in ancient times!!!

This is one of the reasons as to why HE was sought after to be put to death.

It is written in the Holy Biblical Scriptures that on the Tenth Day of the Hebrew Month of Nisan/Aviv, YAHUSHUA HA MASHIACH (a.k.a JESUS CHRIST, not Yeshua) rode on a donkey through the City of YAHrushalayim (a.k.a Jerusalem) during which time some people of that city took PALM BRANCHES and laid them on the ground ahead of the donkey (sometimes referred to as a colt) and some other people took some palm branches and waved them at the YAHUSHUA HA MASHIACH. In the process, they were hailing YAHUSHUA HA MASHIACH The KING OF THE JEWS!

Note that on the TENTH DAY OF THE HEBREW MONTH OF NISAN was FOUR DAYS away from The Moed/Festival of PESACH/PASSOVER.

What does this mean or what is the Significance?

Well, let us read the following Holy Scripture to remind us so we can also make the connection:

12 Yahweh said to Moses and Aaron in Egypt, 2 “This month will be the very first month of the year for you. 3 Tell the whole community of Israel: On the tenth day of this month each man must take a lamb or a young goat for his family—one animal per household. 4 A household may be too small to eat a whole animal. That household and the one next door can share one animal. Choose your animal based on the number of people and what each person can eat. 5 Your animal must be a one-year-old male that has no defects. You may choose a lamb or a young goat. 6 Take care of it until the fourteenth day of this month.

On the very first PESACH event, YAHUVEH (a.k.a YAHWEH) ELOHIM (a.k.a GOD) commanded the Children of Israel through Moshe (a.k.a Moses) to ensure that on the TENTH DAY OF THE FIRST HEBREW MONTH OF THE HEBREW YEAR (a.k.a 10th Nisan/Abib), they got themselves a PESACH SEH (a.k.a PASSOVER LAMB) that would be used as a SIN SACRIFICE for each family thereby representing the family.

Note: A sin offering (Hebrew: קרבן חטאת‎ korban khatta’at, lit: “purification offering”) is a sacrificial offering described and commanded in the TORAH (Lev. 4.1-35); it could be fine flour or a proper animal.

Ever since that very first event, on the TENTH THE OF EVERY HEBREW MONTH OF NISAN up until YAHUSHUA’S death and resurrection, a LAMB was chosen to represent a family as a sin sacrifice.

In the same way, The People of Israel unknowingly chose their FINAL PESACH SEH when they hailed YAHUSHUA HA MASHIACH as their KING during the “TRIUMPHAL ENTRY” IN YAHrushalayim over 2000 years ago (Book of Hebrews). 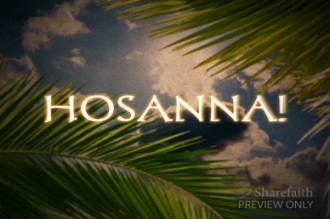 Note this occurred in the year 5,500 (counting from the year in which Adam and Eve were banished from the Gan Eden (a.k.a Garden of Eden) as that was when they received the Holy Prophecy that YAHUSHUA HA MASHIACH would come to earth in human form and represent them as a SIN SACRIFICE after which they would be delivered from Satan’s evil powers particularly the one to sin and the one of death (eternal death).

Indeed it was a “TRIUMPANT ENTRY” and by this I meant that, years before that, on that very TENTH DAY OF THE HEBREW MONTH OF NISAN,

This is spiritually significant for us.

YAHUSHUA was victorious that day as the fulfillment of YAH’S Promise to mankind to deliver them from the power of Satan was beginning therefore mankind was beginning to fully cross from bondage to freedom just like the Children of Israel did with the help of Yahushua the son of Nun.

THE KING Comes to Jerusalem

12 On the next day the large crowd that had come to the Passover festival heard that YAHUSHUA was coming to Jerusalem. 13 So they took palm branches and went to meet him. They were shouting,

“Hosanna!
Blessed is the one who comes in the name of the Lord,
the king of Israel!”

14 YAHUSHUA obtained a donkey and sat on it, as Scripture says:

15 “Don’t be afraid, people of Zion!
Your KING is coming.
HE is riding on a donkey’s colt.”

17 The people who had been with YAHUSHUA when he called Lazarus from the tomb and brought him back to life reported what they had seen. 18 Because the crowd heard that YAHUSHUA had performed this miracle, they came to meet him.
19 The Pharisees said to each other, “This is getting us nowhere. Look! The whole world is following HIM!”

3 Joshua got up early the next morning. He and all the Israelites left Shittim. They came to the Jordan River, where they camped before crossing.

One of the ways in which we are to give back to YAH by singing PSALMS of PRAISES & WORSHIP unto YAH Almighty for HIS deliverance!!!

The first and foremost one is to accept YAH’S SALVATION and faithfully follow YAHUSHUA HA MASHIACH daily through our lifestyles.

Video: HOSANNA IN THE HIGHEST