Bereshit, Bereishit, Bereshis, Bereishis, B’reshith, Beresheet, or Bereishees (בְּרֵאשִׁית‬ – Hebrew for “in the beginning,” the first word in the parashah) is the first weekly TORAH portion (פָּרָשָׁה‬, parashah) in the annual Jewish cycle of Torah reading. 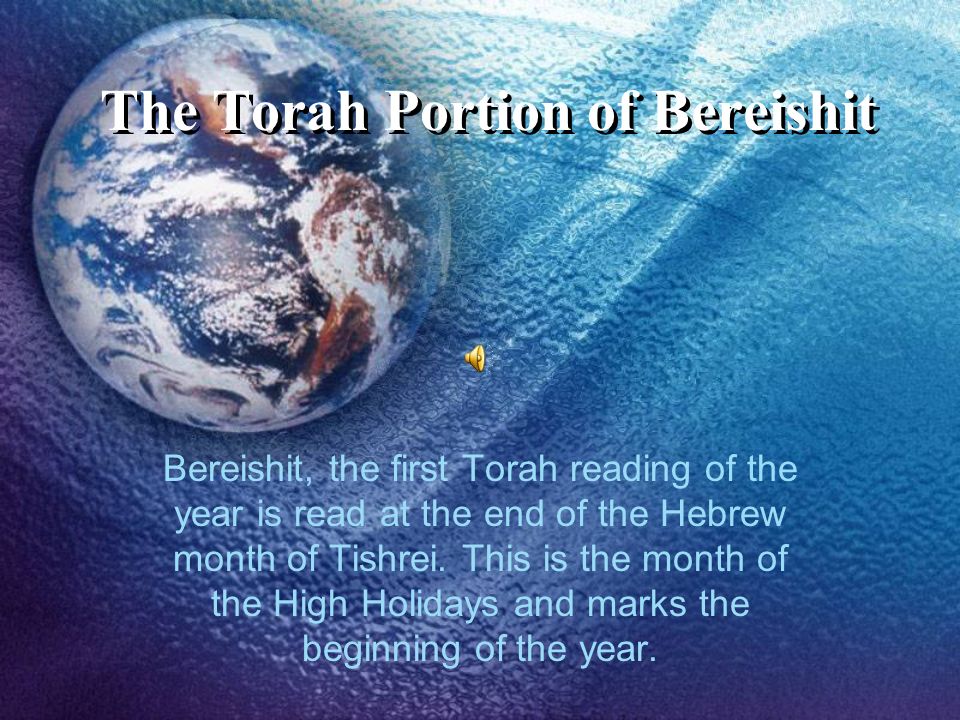 Note that this is also called “SHABBAT MEVORCHIM” (also written as “MEVARCHIM”)!

We are back to The BEGINNING!

Click on the link above for the TORAH Parashah details…

After briefly recommencing the Annual TORAH-Reading Cycle on SIMCHAT TORAH, we now start in earnest. This Shabbat, known as “SHABBAT BEREISHIT,” we read the First Full Sedra in the TORAH.

It is, of course, the SEDRA BEREISHIT from the First of thr Five Books of the TORAH – The Book of BEREISHIT/GENESIS.

The Sefer/Book is mainly narrative. There are only a handful of MITZVOT/COMMANDMENTS.

The Sedra tells how the Almighty YAH (a.k.a ELOHIM) – GOD THE HOLY TRINITY, that is to say, ABBA YAHUVEH,  YAHUSHUA HA MASHIACH and SHKINYINYAH GLORY/RUACH HA KODESH created the universe in six days, beginning with the Shammayim/Heavens and ha arets/the earth and graduating to the sun, moon and stars.

YAH created the Animal kingdom (including the fish of the sea and the birds) and Plant kingdom both on the dry land and in the waters/water bodies.

What Does It Mean To Be Created In GOD’S Invisible Image?

On the seventh day, YAH Almighty rested and still rests. This became the SABBATH (a.k.a SHABBAT/SHABBOS).

By observing SHABBAT, we acknowledge the Almighty YAH as CREATOR of the universe!

The weekly Sabbath celebrates the coming of the Messiah. The Sabbath offers a weekly foretaste of the era of peace and rest when Messiah will rule the earth.

The rest of the SEDRA discusses the well-known stories of the Tree of Knowledge as well as Kayin/Cain and Havel or Hevel/Abel.

The tree of the knowledge of good and evil(עֵץ הַדַּעַת טוֹב וָרָע‬; Hebrew pronunciation: [Etz ha-daʿat tov wa-raʿ]) is one of Two specific Trees in the Story of the Garden of Eden in Genesis 2–3, along with the Tree of LIFE.

The Tree of Life, or Etz haChayim (עץ החיים) in Hebrew, is described in the Book of Genesis, in chapter 2, verse 9 as being “in the midst of the Garden of Eden” with the Tree of the knowof Knowledge of Good and Evil (Hebrew: עֵץ הַדַּעַת‬).

The fratricide of Hevel by Kayin in a fit of jealousy following the acceptance by YAH of Hevel’s Animal Sacrifice and HIS rejection of Kayin’s fruit platter!

After 10 generations, Noach/Noah is born. However, his contemporaries do not share his love of the Almighty YAH and sin and immorality are rife. The LORD YAHUVEH’S patience starts to wane and begins to contemplate the destruction of mankind.

This week is Shabbat Mevorchim/Mevarchim.

Every Shabbat blesses the week that follows it. The spiritual work we do on the day of rest fills our “gas tank” with blessings to last us through the next six days. Once a month, however, we have the opportunity to fill an even larger tank.

The Shabbat before the start of a Hebrew/Jewish month (Rosh Chodesh) is known as Shabbat Mevarchim, “the Shabbat when we bless.” On this day, during the synagogue service, we recite a Special Blessing for the New Month and announce the timing of Rosh Chodesh.

On Shabbat morning, after the TORAH-Reading, the chazzan (reader) holds the TORAH scroll in his arms, and the following is said:

May HE (YAHUVEH) who performed miracles for our fathers and redeemed them from slavery to freedom, speedily redeem us and gather our dispersed people from the four corners of the earth, uniting all of Israel, and let us say, Amen, in YAHUSHUA’S Name. (Amen)

Rosh Chodesh (name of month) will be on (day(s) of week), which come(s) to us for good.

May the Holy One YAHUVEH, blessed be HE, renew it for us and for all HIS people, the house of Israel, for life and peace (Amen), for gladness and for joy (Amen), for deliverance and for consolation, and let us say, Amen, in YAHUSHUA’S Name. (Amen)

Customarily, this is preceded by an announcement of the time and day of the molad (the projected time of the birth of the new moon). Many congregations also begin with a Prayer starting with the words yehi ratzon (“May it be YOUR Will, YAHUVEH”).