BLUE & WHITE [which are YAH’S (a.k.a ELOHIM’S) Main colours] are today’s special colours!

We have prayer and Holy Biblical Scriptures suggestions on this website which you can as a daily guide. Today is twenty days, which is two weeks and six days of the Omer.

The Omer is counted every evening after nightfall, from the second night of Passover till the night before SHAVU’OT/WEEKS/PENTECOST (sun-down Saturday 8th to sun-down Monday 10th June 2019).
Forgot to count the Omer at night? Count the following day, but without a blessing.
On subsequent nights, continue counting with a blessing as usual.
The blessing is made only if every day has been counted; if you missed a day, say the day’s count without the blessing.
HA BRACHA/THE BLESSING (a.k.a berakhah, bracha, brokho, brokhe):

Blessed are You, YAHUVEH our GOD, King of the Universe, who has sanctified us with HIS commandments, and commanded us concerning the counting of the Omer.

In 70 AD, we lost the Holy Promised Land during a Roman invasion. Praise YAH Almighty for HE used the U.S.A in 1948 to restore the land to us, Israel!

Hope you’re having a wonderful day.

On this day, it is tradition to wear Israel’s flag colours which are BLUE and WHITE!

It is also tradition to sing the Israeli National Anthem:

These are the words of the Israeli Anthem. It’s called the “HATKIVA” meaning “THE HOPE”.

Additionally the following are the traditional activities in a nutshell:

You can serve regular barbecue fare, decorate with Israeli flags and play Israeli music on the stereo.
Serve those Israeli foods you just cooked, with an Eretz Yisrael cake for dessert.) 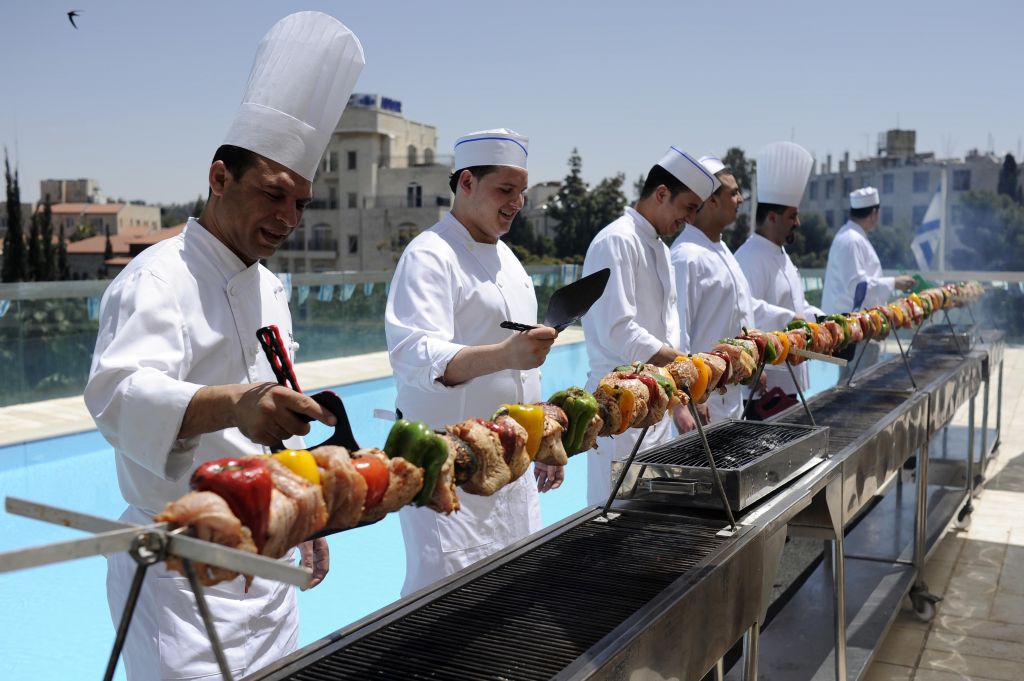 BBQ recipes with an Israeli twist:

3. Watch Israeli Movies [for example, the following are highly recommended:
(i). Ushpizin(about an ultra-Orthodox couple celebrating Sukkot in Jerusalem)

(ii). Walk on Water (an intelligence agent in the Israel Defense Forces deals with a difficult mission and falls in love),
or
(iii). Late Marriage (an Israeli man from an immigrant family struggles against his parents’ attempts to arrange his marriage.

Afterwards, chat about how it affected your guests’ understanding of Israel.].
4. Talk Politics and Peace (You can study more about the conflict between Israel and Palestine.

Incidentally, many award-winning Israeli films and TV shows, including:
(i). “Arab Labor,” a comedy about an Arab-Israeli family,

……..address this issue head-on — so you could combine a movie screening with a discussion.
You may not solve the problem, but it’s a great way to recognize what you hope for in the future.]

5. Make Some Crafts [If you’re in the mood for some crafts, you can make your own mizrach sign.

A mizrach sign is a wall hanging for the easternmost wall of the Jewish home, reminding us which way to face while praying — toward Jerusalem. Making a mizrach is a nice reminder that Jewish people have always longed for our homeland, wherever we live.]

Once again, A VERY HAPPY YOM HA ATZMAUT to all physical and spiritual Israel as well as biological plus adopted Israel!!

Yom HaZikaron 2019 in Israel began in the evening of:

and ended in the evening of:

Please do accept our very sincere apologies for not uploading crucial posts in relation to YAH’S Calendar as well as teachings regularly as before. Having a new addition to the family can be a challenging adjustment in life. We trust YAHWEH that the frequency of blog post uploads will change in a positive way in due course. In the meantime, please do bear with us plus feel free to browse with the assistance of the search bar.

The physical Israel have instructions from ABBA YAHUVEH to fight for what belongs to them. They can’t give up. There’s something that drives them.

In summary, Israel keeps being invaded and taken over for various reasons however they have to keep rising up to fight for their YAH-given inheritance!!! They have every right.
HISTORY:

Remember that we lost our independence in 70 AD in our holy promised land when the Romans fought them and kicked us out of our YAH-given land.

Then with U.S.A’s support, in 1948, we regained our land back but not all of it because by that time, the Palestinians had taken over.

Also, in the very beginning some time after the Great Flood, the Israelites (Shemites) lost their land to the Canaanites (From Cham’s/Ham’s lineage) who forcefully took over the Holy Land, Israel against ABBA YAHUVEH’S instructions to Noah. Then ABBA YAHUVEH (a.k.a ABBA YAHWEH) gave Noah land proportions.

Shem had to inhabit elsewhere close by. Remember that there were less people on the earth at that time. Abraham meets Shem years later. In fact Shem is Melkizedek mentioned in Genesis and Hebrews.

Years later, through Abraham’s relocation from Iraq (his birthplace)  to Syria and finally back to Israel, they were able to reclaim the land little by little. As we all know as per Genesis that YAHUVEH instructed Abraham to relocate. HE later revealed HIS plans to Abraham which manifested physically.

Then later on in history, the Israelites (our ancestors) lost their land to the Canaanites and Philistines and others during the World’s Greatest Famine (Joseph’s time as Zephanath Paneer in Egypt). This lasted about 430 years (in slavery) plus 40 years (in the wilderness) = 470 years.

The Israelites (our ancestors) returned to their land to fight for their land after crossing the Jordan River with Yahushua/Joshua the son of Nun as their leader. We conquered again but still had small battles here and there from their various enemies like the Philistines, Amalekites (from Esau’s lineage) and sadly, others from within Abraham’s lineage.

Remember that Abraham sent his other children away with their inheritance before he died so that they didn’t bother Isaac later on in life but sadly they joined hands with Esau’s children qnd rose us against Jacob’s a.k.a Israel’s children.

The land was lost again to various our empires, such as the Babylonian Empire, Persian Empire, the Greek-Syrians (Chanukah/Hanukkah), etc however ABBA YAHUVEH in HIS mercy always at some point through pioneers such as Nehemiah and Ezra restored it to us. HalleluYAH!
In summary, Israel keeps being invaded and taken over for various reasons however they have to keep rising up to fight for their YAH-given inheritance!!! They have every right. How they do it, hmmm… only YAHUVEH knows best!

Remember that ABBA YAHUVEH told King Saul not to have mercy on the enemies at all but he disobeyed by sparing some hence they became a pain for life! Saul, an Israelite was rejected by YAHUVEH for this. The Israelites read their Bibles very well. They don’t want to be rejected by YAH Almighty for rejecting their inheritance!